Suikoden (幻想水滸伝, Gensōsuikoden), often referred to as Suikoden I, is the first instalment of the Suikoden series, designed and released initially for the Sony PlayStation and later for the Sega Saturn.

It tells the story of the (player named) son of Teo McDohl, general of the Scarlet Moon Empire and his exile from the Empire and rise to leader of the Toran Liberation Army aiming to overthrow the government.

Suikoden's six-person party, arranged in two rows (front and back), which each character having an optimal range (Short, Medium or Long) was retained through Suikoden II and Suikoden III, was restored for Suikoden V and appeared in truncated form in Suikoden Tierkreis.

The first Suikoden game also introduced to the series war battles, as well as one-on-one duels. Again, both these ideas would be used in every main game of the series until 2009's Suikoden Tierkreis removed these regular parts of the series.

The game told the story of the hero, the son of Teo McDohl, one of the Great Generals of the Scarlet Moon Empire. The hero, through his friend Ted, comes into possession of the Rune of Life and Death, one of 27 True Runes that governs various aspects of the world. The Rune, ruthlessly hunted for by corrupt officials within the Empire and their manipulators, forces the hero and his companions to flee the capital city of Gregminster.

Eventually, the hero finds his way to a rebel organization where he is sheltered, although he is only convinced of the need to struggle against the Empire, when the hideout is attacked and sacked by Imperial forces. Recruiting the help of Mathiu Silverberg, a former Imperial strategist, McDohl's Liberation Army starts off as a small force working to unite rebel factions throughout Scarlet Moon before bringing down the Empire itself. Following the war, which was filled with much loss of life and many good people on both sides, the hero, still bearing the Rune of Life and Death, leaves the nation.

Murayama Yoshitaka and Kawano Junko had initially begun spec work for an RPG for a planned Konami console that was later cancelled. Sometime following this, Murayama, Kawano, and ten other employees were assigned with developing Konami's first games for Sony's upcoming console, the PlayStation. With the pick of making a baseball game, a racing game or an RPG, Murayama and Kawano decided to reopen their RPG project.

Committed from the start to make a franchise to rival series such as Dragon Quest or Final Fantasy, Murayama wrote the scenario of the first Suikoden. Unimpressed with their early 3D modeling tests, he opted to make a traditional 2D RPG using sprite graphics.

In the winter of 1993, when pitching his idea of an RPG with a great gallery of supporting characters, inspired by Murayama's preference for manga such as Fist of the North Star and Captain Tsubasa he instead decided to use the classic Chinese novel Shui Hu Zhuan in order to better illustrate his point, wagering that the classical Chinese novel would resonate better with his older superiors. The pitch was a success, and in this short meeting the game was given the name Suikoden, the Japanese reading of Shui Hu Zhuan, and Murayama was tasked with making 108 characters mirroring the 108 outlaws in the Chinese classic.

Suikoden was released on December 15, 1995 in Japan. It had two TV commercials in Japan, a 30-second spot and a shortened 15-second variant featuring the song Premonition by Jadranka. The game would be released in North America on December 28, 1996, followed by a European release in March, 1997.

There were few strong differences between the Japanese and overseas versions of the game, save for dialogue adjustments for localization and such. The only major graphical change was a removal of the crossbeam and corresponding arm sprites where Sydonia and Varkas are tortured in Rockland. This would change the context of the scene from a crucifixion to being tied at the stake. 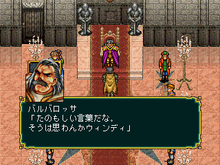 The game would be ported to the Sega Saturn with a release date of September 17, 1997. Although the game was mostly identical to the PlayStation original, a number of additions were made. This version was never released outside Japan.

In terms of graphics: portraits, spells, and other effects were redone for the Saturn's hardware. Though there is contention as to whether these are improvements or changes forced by Saturn hardware limitations. Gameplay wise, the major additions were an extra story event; at a certain point a random female recruit will be abducted by Anji and his crew and the player will have to rescue them. This would replace the original recruitment scenario for Anji, Kanak, and Leonardo.

Other additions included a coliseum mode run by Eikei, which included armor and equipment that was not part of the original PlayStation release, including the Darkness Rune. An additional short story scene was added after the revival of Gremio, showing his thoughts and experiences as he returned to life. A new opening movie was included, replacing the one on the original PlayStation. 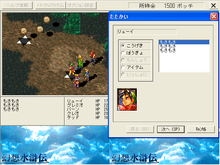 Finally, an easy way to play Suikoden on a PC. *cough*

On March 26, 1998, Suikoden received a port to the Microsoft Windows platform, specifically Windows 95. It was a full, dedicated port, utilizing a Windows-style GUI and tabs for menu navigation and presenting the game itself in a small window with menus on its right-hand side.

All menus were navigated using the mouse and through point-and-click. This included shops, equipment, runes, as well as battle options. Additional options allowed players to scale the size of the gameplay window to their preference.

This release was available in Japan by March 1998 and Korea by April 1999, with no other localizations made available. The game would be later be given away as a free CD with the December 1999 issue of Korean video game magazine V-Champ.

Suikoden would be ported, along with Suikoden II, to the Sony PSP on February 23, 2006 as part of Genso Suikoden I&II. The game would be adapted to display in the PSP's 30:17 screen ratio with minor graphical adjustments to accommodate the new resolution. A new portrait was also drawn for McDohl and ground textures in many locations were given more detail to match the aesthetic of Suikoden II slightly more closely. The game's content would remain identical to its original PlayStation release. 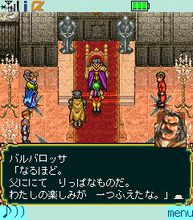 On June 16, 2008, Suikoden would be ported to i-mode compatible mobile devices, available to download through the Konami Net DX mobile service. The game was over 19.4MB in size, thus requiring an SD card to download at the time. It cost 500 points on Konami Net DX, roughly working out to 525 Japanese yen.

The size of the in-game display would be truncated to fit within the restricted window size and ratio of mobile devices, forcing some sprite and portrait re-placement. The gameplay and content of the game remained unchanged from the original PlayStation version.

The original PlayStation version of the game would be the version ported to PSN on PlayStation 3 on December 23, 2008 and February 4, 2015 for North America and Europe respectively. Vita support in all regions would only be enabled on the game's release in Europe in 2015.

As Genso Suikoden I&II was already available as a digital title in Japanese PSN stores, Suikoden did not receive a Japanese release as a PS1 Classic title. This version of Suikoden is compatible with the PSN version of the Suikoden II, allowing players to transfer their data in the same manner as the PlayStation original.

Finally, an easy way to play Suikoden on a PC. (2023 Joke Remaster)

During Konami's Tokyo Game Show presentation on September 16, 2022, it was announced that both Suikoden and Suikoden II would be receiving HD remasters. Suikoden will receive completely redrawn HD backgrounds, upgraded spell animations, and new redrawn character and portrait artwork from Kawano Junko. Widescreen support and a running animation for McDohl, similar to that of the 2005 PSP remaster are also confirmed.

The game has a tentative release date of 2023.

Suikoden would earn a 26/40 score from Weekly Famitsu on its release, marking it as the lowest rated main game in the Suikoden series on original release by the magazine. The Saturn port of the same game would later receive a score of 25. This would stand unopposed as the lowest scored game in the series until 2001's Genso Suikoden Card Stories also earned a 25. 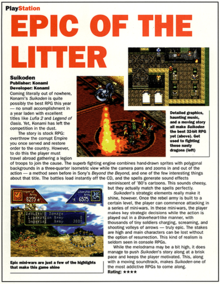 Next Generation's 4-star review from January 1997.

Coverage of the game overseas would begin in early 1996. As one of the PlayStation's earliest RPGs, it was the focus of great expectation and praise as well as a disproportionate amount of coverage compared to its sequels. GameFan would give an import version of the game scores of 90, 90, and 97 in its April 1996 issue. The game would be especially praised in these early stages for its deep story, variety of characters and gameplay, and its soundtrack.

Overseas reviews would begin to trickle out by the end of 1996. GameFan would give the English-language release scores of 90, 95, and 96. As before the story, gameplay, and music were highly praised with minor criticism coming into play for its burdensome equipment system and bland overworld map. Computer and Video Games gave Suikoden a score of 3/5 in January 1997, noting its graphical similarity to previous generation RPGs, but highlighting its strengths in story and music.

In November 1997, Sega Saturn Magazine mooted the possibility of a port of the Saturn version, noting its "improved graphics, revised game system, new maps and an original rendered movie". Nothing came of this. Korean computer magazine PC Power Zine would score the Korean Windows 95 port of the game 3/5 in its April 1999 issue.

Over time the game would continue to be remembered fondly, even if crouched in qualifiers about the timeframe in which it was released. By 2002, it would be positively remembered as part of the series' PS1 duology. It would frequently be cited for comparison with its PS2 sequels, increasingly in a flattering fashion.

In April 1996, the Genso Suikoden Original Game Soundtrack was released as the game's official soundtrack. It came on 2 CDs and featured all 58 tracks featured in the game.

From August to November 2008, Radio Genso Suikoden: Assemble! 108 Stars! was an internet radio show featuring an audio drama of the game performed by Japanese voice actors. These would be released as a drama CD on December 18, 2008.

Genso Suikoden The Succeed Crest was a manga adaptation of the game that ran for two volumes from 2009 to 2010. It is from that manga that we get the alternative name for the main character; Louie. Before that, the 1998 manga Konami Parody Comic Series Genso Suikoden focused exclusively on the title, being published before Suikoden II's release.