Suikoden II (幻想水滸伝II, Gensōsuikoden II) is the second instalment of the Suikoden series, designed and released initially for the Sony PlayStation.

The game tells the story of the (player named) adoptive grandchild of a great hero now living a quiet life in the nation he fought against years ago. When the hero's youth brigade is betrayed, he escapes with his best friend but soon he is called upon to lead the fight against his home country.

As a sequel to the first Suikoden, Suikoden II maintained and improved upon many of the mechanics used in the original game. Additional runes, skills and status effects were added to this sequel. The addition of multiple rune slots, depending on the character, opened up the possibility of greater character customisation. A greater variety of character types also helped to improve gameplay.

The war system was revamped, changing Suikoden's Rock-Paper-Scissors type field battles into a grid-based strategic style. These upgrades aside, the core gameplay remained the same. Instead the game is filled with more towns, side-quests, mini-games and other features in order to bring the world of Suikoden II to life.

Along with graphical improvements, a party inventory system, and a "dash" button that allowed the player to move around the screen quicker were added. A transfer of data from the prior game in the series enables returning characters to enter the fray with higher levels and improved weapons. References to the original Suikoden are also added to this feel of continuity, which contributed to the game's popularity.

Suikoden II told the story of the hero, adoptive grandson of the great Jowston hero, Genkaku, now living in the Highland Kingdom. Serving in the Highland youth army, The hero's regiment is betrayed by Highland prince, Luca Blight in order to manufacture a war with Jowston. Escaping with his best friend, Jowy, and adoptive sister Nanami, the three soon find themselves embroiled in Jowston's defence against Highland.

However, Jowy becomes convinced that only one nation can safely protect the region and joins the Highland side, usurping it from within until he becomes King. Meanwhile, the hero, based on his heritage, becomes leader of the forces opposing the Highland advance. Bearing the Bright Shield and Black Sword Runes, the two are destined to oppose each other. The player's forces eventually emerge victorious but the war will not end until the hero and Jowy meet at Tenzan Pass for one final duel.... 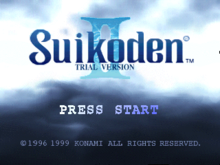 A demo of Suikoden II was packaged with select Konami releases in both Japan and overseas. In Japan, the Suikoden II demo would be released with Metal Gear Solid on September 3, 1998. Overseas, it would be packaged with Vandal Hearts II, which was released on November 30, 1999 in North America, and June 30, 2000 in Europe. Only the Japanese version of the demo was available before the full release of Suikoden II in its respective territory.

The demo was described as a "Demo" on packaging and in its manual but as a "Trial Version" in the game itself. The demo came with two selections; New Game (also referred to as 'Story Mode') and Battle Mode. Saving is disabled in both modes. Story Mode is merely a full gameplay slice of Suikoden II, from the beginning of the game until the boss battle against the Mist Shade on North Sparrow Pass. After naming the main character there is no option to import Suikoden data. As the demo was released overseas virtually concurrently with the full game, the English language localization is identical to the full game. 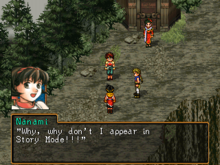 Battle Mode takes placed on a slightly edited North Sparrow Pass, now titled "Trial Road". In Battle Mode, the player is able to form a custom party from 16 different characters (including the hero, now named "Suikoden" as there is no naming screen in this mode), most of which are not available in the Story Mode, with varied equipment and runes.

A runemaster and item vendor are available on the pass and the random encounters feature different enemies from the full game. These enemies stats have all been recalibrated to sync better with the beginning character level for Battle Mode; Level 14. A handful of extra treasure chests have also been added to the map.

At the end of Trial Road, Luca Blight makes an appearance to taunt the player before leaving them to battle the Double Head. After the boss is defeated, Luca will curse the player, vowing revenge. Your chosen party will then congratulate you before returning you to the title screen. 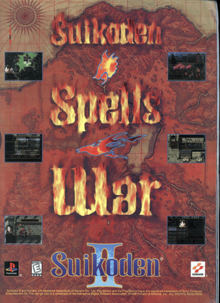 Suikoden II was released on December 17, 1998 in Japan. It had two TV commercials in Japan, a 30-second spot and a shortened 15-second variant. The game would be released in North America on September 29, 1999 with print advertisements in video game publications such as Electronic Gaming Monthly, and would be followed by a European release on July 28, 2000.

There were no strong differences between the Japanese and overseas versions of the game, save for dialogue adjustments for localization and such, as well as a handful of bugs introduced in the different versions. In Germany, the game would be translated and localized into German, the first time this was done for a Suikoden release in the country (in most situations for Europe, games would ship in English with only the case and instruction receiving translations into other languages).

An audio glitch present in the North American version of the game prevented certain tracks, most notably vocal songs sung by Annallee, as well as Battlefield Without Light, the game's predominant war battle theme, from playing. Another bug prevented the name of the hero of the first game from being imported correctly. Instead, the first letter of the hero's name would replace the first letter of the placeholder name "McDohl" only. With the popularity of the name "Tir", this would result in the character being named "TcDohl". These bugs were rectified for the European and Oceanian releases. 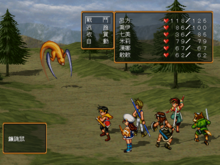 In 2003, the game received a port to the Microsoft Windows platform, specifically Windows 95, for release in China. As it was the only Suikoden title to receive an official Chinese port, it does not have an option to import data from the Suikoden Windows 95 port.

Beyond being localized in Mandarin Chinese, the game features smoothed character graphics and portraits. Enemy graphics are also smoothed. Environments such as towns and forests are scaled up but are not affected by smoothing. Beyond this, there were no major changes made.

This release was only available in China, with no Japanese or other overseas versions available.

Suikoden II would be ported, along with Suikoden, to the Sony PSP on February 23, 2006 as part of Genso Suikoden I&II. The game would be adapted to display in the PSP's 30:17 screen ratio with minor graphical adjustments to accommodate the new resolution. The game's content would remain identical to its original PlayStation release. 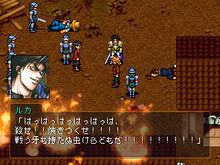 On December 24, 2009, Suikoden II would be ported to i-mode compatible mobile devices, available to download through the Konami Net DX mobile service. The app itself was 1MB, with 150MB external data also needed. It cost 800 points on Konami Net DX, roughly working out to 840 Japanese yen.

The size of the in-game display would be truncated to fit within the restricted window size and ratio of mobile devices, forcing some sprite and portrait re-placement, though advances in mobile platform ensured these changes would be less extreme than the mobile port of its predecessor. The gameplay and content of the game remained unchanged from the original PlayStation version.

This version of Suikoden II was compatible with the i-mode version of the original Suikoden, allowing players to transfer their data in the same manner as the PlayStation original.

The original PlayStation version of the game would be the version ported to PSN on PlayStation 3 and Vita on December 9, 2014 and February 4, 2015 for North America and Europe respectively. The game would top the download charts for PS1 Classics on PSN for the week of its release in North America.

As Genso Suikoden I&II was already available as a digital title in Japanese PSN stores, Suikoden II did not receive a Japanese release as a PS1 Classic title. This version of Suikoden II is compatible with the PSN version of the original Suikoden, allowing players to transfer their data in the same manner as the PlayStation original.

Suikoden II would earn a 30/40 score from Weekly Famitsu on its release, giving the game a Silver Hall of Fame status as a result. Dengeki PlayStation were even more approving of the game, giving it an 80, 90, 90, and 95 for an average score of 88.75.

Overseas, coverage began in early 1999. Compared to its predecessor, coverage was more muted, as a glut of RPGs were now available for the Sony PlayStation, with more in development, including Final Fantasy VIII. The upcoming release of the Sega Dreamcast as well as the announcement of the PlayStation 2 also dominated gaming headlines in the runup to Suikoden II's international release.

As development continued, outlets noted that it appeared to be "more of the same" in terms of story, gameplay, and graphics while also praising the incremental updates in detail and spell effects, as well as the possible implementation of save transfers from the original title. By late 1999, the game was being drawn as an "old-school RPG" in comparison to other contemporaries, such as Grandia II and Wild Arms II.

Reviews would begin to drop in October 1999 and were generally positive, if more cautious than those for the original game. GameFan would give the game scores of 60, 82, and 70, noting that fans of the first game would very much enjoy the title while remarking that the story and characters fell flat.

Electronic Gaming Monthly would give the game a 7.0 out of 10 in November of 1999, noting that the main character could not move diagonally. GamePro would deliver Suikoden II a 2.5 out of 5, noting its "dated look" and suggesting that even fans of the original would be hard pressed to enjoy this sequel.

The Official U.S. PlayStation Magazine would be more effusive, scoring the game 4/5, saying that while aspects of the game did come across as dated, it mostly succeeded at blending its classic style with innovative changes. Online reviews also trended more positively; Gamespot gave the title a 7.6, and both Game Informer and IGN would score the game at 9/10.

Positive comments centered around the size of the game's cast, the increase in graphical fidelity, as well as the reduction in loading times from its predecessor. The variety of gameplay and optional mini-games were also praised highly, as well as the quality of the game's plot and story. Criticism was usually directed at the game's sprite-based graphics, the perceived blandness of its environments, and a sloppy translation. Suikoden II's similarity in all respects to its predecessor was both cited as a positive and a negative from various review outlets but overall, it was felt that gaming had moved on from the style of RPG Suikoden and Suikoden II represented.

Lauded by many fans as the best game in the series, Suikoden II spawned no less than three spin-off games before its next direct sequel, Suikoden III, was released in 2002. It was also around this time than Suikoden publications began to be printed in earnest, including a quarterly magazine devoted to the series. Merchandise began to be produced and a collectible card game was released. The four years between Suikoden II and its successor saw the greatest concentration of merchandise and publications produced in the series' history.

Over time the game's popular reputation would improve. Even in 2002, it would be fondly remembered as the best part of the series' PS1 duology. It would frequently be cited for comparison with its sequels, increasingly in a flattering fashion. By 2004, copies of the game on eBay were selling for over 100 USD.

By 2005, Suikoden II would be considered the series' finest hour by video game publications, reflecting the popular fan perception of the title.