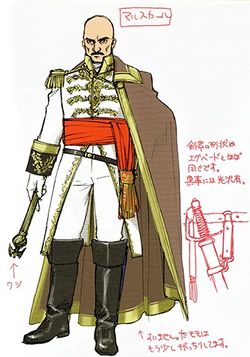 Marscal is bald, although his eyebrows and mustache indicate he would likely have had dark, black hair. He wears a very ornate outfit, as befitting his social and political standing. A white longcoat, with various gold trimming, tassles and ties, as well as black and gold sleeves, wrapped with a red cumerbund, also with golden tassles, is worn over white trousers and a black undershirt.

Marscal also wears black, knee-high boots and white gloves. He wears a brown half-cape with gold trim and designs over his left arm and, in his official art, carries a golden sceptre in his right hand.

Marscal's political beliefs are made clear. He believes in the forceful subjugation of Falena's enemies through any means neccessary, including the use of the Sun Rune. Regarded as highly xenophobic, Marscal has no respect for what he termed "the lesser demi-human races" in Falena. In fact murder of demi-humans in Stormfist was common as everyone knew that there would be no investigation into such crimes due to Marscal's influence. It is this passion for cultural hegemony that also fuels Marscal's distrust of Raftfleet.

As an individual, he is said to be intelligent but more cautious than his son, Gizel. He is capable of acts of great bravery, especially in his youth, and is said to have inspired the loyalty and respect of many within Falena's political and military ranks. He also has an eye for talent that could overcome his xenophobic views. He would employ the prodigious Lucretia Merces as his strategist despite her Grassland heritage.

Marscal Godwin was the leader of the Godwin Faction one of the two power blocs that influenced policy within the Queendom of Falena. Compared to the Barows Faction, Marscal was very much a hardliner and a believer in Falena's right to use military force to secure her prosperity. He was married to Rosalind, whom he loved dearly, and was the father of Gizel. 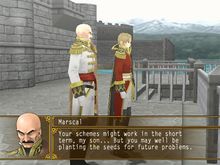 During the Royal Family Succession Conflict, Rosalind would be killed by the Nether Gate assassin, Michafute. Although Marscal's cousin Mardas was married to Shahrewar, his faction was not unduly punished once Falzrahm claimed the throne. Instead, all faction influence in the Falenan Senate was heavily curbed until her early death.

Two years later, after Falzrahm's unexpected death and the ascension of her daughter, Arshtat Falenas, Marscal began laying the foundation of his later plans. He secretly reformed Nether Gate shortly after its official dissolution by Arshtat. In fact, he did this with the help of Michafute, whom he took in despite his role in the assassination of his wife. It seems that around this time, Marscal began plotting to take control of Falena as he travelled to the northern continent and recruited Lucretia Merces as his strategist.

During the Armes Invasion in SY 441, Marscal would lead a charge that saved the life of the surrounded unit led by Dilber Novum. From that moment on, Dilber would consider himself indebted to the Godwin Faction, becoming his loyal ally.

Despite his employment of the Lady Merces, in 447, when Marscal began plotting to steal the Sun Rune from Sol-Falena, Lucretia went behind Marscal's back and warned Queen Arshtat of his plans and advised her to bear the rune upon her person. After the Lordlake Uprising, Marscal imposed as many harsh measures against Lordlake as he could, including the building of Hatred Fortress, which also functioned as a dam, in order to eliminate any chance of the truth being revealed.

Despite his position as head of the Godwin Faction, it seems that as his son, Gizel, matured, Marscal left much of the actual planning of their schemes to him, preferring instead to offer advice and comment from the sidelines. He often criticised Gizel's methods, regarding them as dangerous and risky. Still, Gizel's machinations which he planned without any goal in mind, did secure the Godwin victory in the Sacred Games thanks to the use of another former Nether Gate member, Childerich. This victory gave Marscal the chance he needed to commit a coup on the Sun Palace later that year. 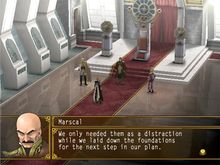 As part of his plan to buy time, Marscal entered into an alliance with Falena's most bitter enemy.

Marscal remained very much on the sidelines, instead letting Gizel take center stage as the Commander of the Queen's Knights and Queen Lymsleia Falenas' husband. It seemed his 'official' position in the Sun Palace was that of an adviser. However, it is known that he involved himself with devising military strategies along with Gizel as the two attempted, with little success, to suppress the Falenan Prince's Imperial City Recapture Army which had been gaining support in the south-eastern reaches of Falena.

Marscal's intense xenophobia manifested itself in the Sun Rune War with his plots to commit genocide on both the beavers and cave dwarves. These genocides were only narrowly avoided thanks to the efforts of the Recapture Army.

Although the House of Godwin had staunch support in Stormfist, the rest of Falena had little trust in the administration. This lack of trust cost the Godwin faction a number of territories, including Lelcar and Doraat. Even the 10-year old Lymsleia noted that the Prince's forces were able to take advantage of the people's lack of trust in the Godwins. Eventually, the Godwins were left with few other choices but to ally with the New Armes Kingdom, much to Marscal's distaste.

That being said, all of this manoeuvrings were plotted to buy time, time needed to continue research into the Sun Rune so as to wield it at will. 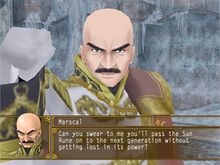 Marscal would challenge his foes to prove they could avoid falling into the same traps as he did.

This alliance soon collapsed, however, after initial success gave way to several embarrassing defeats. Eventually, Doraat fell once again and the head of the Falenan Royal Navy, Bahram Luger, fell in battle. Even Stormfist, the Godwin family stronghold, fell to the Recapture Army, along with Marscal's most loyal general, Dilber Novum, as well as Childerich.

Once the Loyalist Army began to bare down on Sol-Falena, Marscal fled from the capital, along with his loyal Nether Gate officer, Dolph. The two eventually made their way to the Sindar ruins at the Founder's Site in the Ashtwal Mountains, where Marscal would begin to melt the glaciers there with the Sun Rune, an action that would threaten to flood the Feitas and decimate Falena.

In response the Prince and his entourage would pursue him. Confronting each other at the end of the ruins, Marscal said that he had no intention of flooding Falena and that his actions were merely a ploy to force a final confrontation and maintained that everything he had done was to make Falena a greater and more prosperous nation. He also admitted to being influenced by the Sun Rune in much the same manner Arshtat was but dismissed the notion that he was not responsible for his actions, stating that he chose to be influenced by the True Rune.

Demanding proof that the Prince would not succumb to the rune's influence as he did, he would use it to become an incarnation of its power and attacked the Prince's entourage. After his defeat, Marscal perished. He would appear in the Prince's visions along with the spirits of the other lives lost in the conflict, seemingly at peace.

Marscal is an old Middle Dutch word and the ancestor of the modern English title and name, marshall. Godwin, meanwhile, is an Anglo-Saxon surname, most known on the internet for "Godwin's Law", an adage proposed by Mike Godwin in 1990 which states "As an online discussion grows longer, the probability of a comparison involving Nazis or Hitler approaches 1" which conflates well with Marscal Godwin's own passionate racial policies.

Marscal Godwin's theme is the song "Standing Firm" which plays during most Godwin Faction intrigue scenes. It is song 27 on disc 1 of the official Suikoden V Original Soundtrack.