Lelei (レレイ, Rerei) is a supporting character in Suikoden V. Lelei is a prison guard assigned to watch over Lucretia Merces during her confinement to Agate Prison. 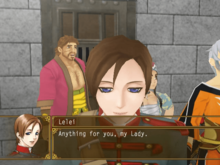 Lelei is a gal being a pal with another gal.

Lelei was a Godwin Faction officer and prison guard who was stationed at Agate Prison. Alongside with her companion, Cius, she was assigned to guard the tactician Lucretia Merces following her incarceration in the aftermath of the Lordlake Uprising. Immediately taken by Lucretia, she could not help but be swayed by her arguments and so became dissatisfied with the Godwin administration. Over the time, she would fall in love with Lucretia as their relationship progressed beyond that of jailer and captor and then student and teacher.

In the early stages of the Sun Rune War, when the Prince broke into the prison in order to secure Lucretia as a tactician, Lelei attempted to defend Lucretia, suspecting the Prince and his companions of being Godwin assassins. After she and Cius were defeated and learned the truth, however, Lelei gladly joined the Imperial City Recapture Army.

During her time guarding Lucretia, Lelei was tutored in military strategy, making her a sufficient strategist in her own right. Indeed, when the Godwin Army attacked Lelcar, Lelei was sent by Lucretia to be the strategist for the rebel forces.

Although the Recapture Army achieved victory, Lelei felt deeply ashamed that Zahhak managed to set fire to Lelcar's western islet. She apologized to Lucretia who told her never to apologize for her actions but instead maintain that without her guidance, things would have been much worse, a statement that both the Prince and Lucretia believed to be correct in this situation.

Lelei later performed a military survey on possible foreign intervention in the Sun Rune War. She reported that the Island Nations Federation, the Kingdom of Zelant, and Nagarea showed no signs of allying with the Godwin Faction. Lelei was a tall woman, and a lot of other girls admired her, but she wished she was a little shorter herself. In fact, when she was by herself, she stooped. However, she did find one use for her long legs, for in the baths she was able to sit both Shun Min and Eresh on each knee.

When Shula Valya requested an audience with the Prince and Lucretia after the successful repelling of the Armes Southern Mountain Corps by the Recapture Army, Lelei was extremely distrustful, suspecting the invitation to be an Armes trap. Even when their offer of alliance proved to be genuine, Lelei was still very suspicious and angry, deriding Nifsara as a "harlot". She would later admit that she was in error, noting that her suspicion must have made her seem a very small-minded person.

After the war, she disappeared along with Lucretia, abandoning Cius, but turned up years later, returning to service in Falena as a formidable strategist in her own right. Able on and off the field, she became known as the Crown's Brilliance.