Charlemagne (シャルルマーニュ, Sharurumānyu) is a supporting character in Suikoden IV and Suikoden Tactics. Charlemagne is a highly refined gentleman from Middleport and friend of Schtolteheim Reinbach III. 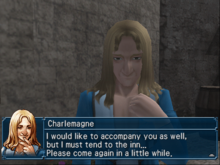 Innkeep by day, narcissist by night.

Charlemagne ran the Lovely Ringlet Cottage inn on Middleport island around the time of the Island Liberation War. He was a gentle hearted man who was unfaltering polite to everyone. He also practiced swordplay as a hobby, having discovered a taste for it at some point.

He would find himself involved with the Allied Forces when they recruited Helga, who had previously damaged his inn. Charlemagne would cover the costs of Helga's damages, freeing her to join them. Having heard of the leader's accomplishments, he would ask to join the crew after taking some time to sort out his personal affairs.

Aboard the Headquarters Ship, Charlemagne's refined attributes along with finely honed aesthetic sense would lead him to become a close friend of Schtolteheim Reinbach III. Following the war, Charlemagne would be given peerage as a nobleman by Reinbach for his service.

Two years later, Charlemagne traveled alone into Kooluk territory, following bandits who had stolen Reinbach's Rose Crest. His friendship was such that he was willing to risk his life alone to recover it. Kyril would be hired by Reinbach to assist him, and, fighting together, Charlemagne was able to retrieve the precious object, but he was devastated that Reinbach apparently doubted his ability.

They returned the item to its rightful owner who explained that he did not doubt Charlemagne's skills but was worried that something might have happened to his trusted friend, bringing Charlemagne much relief. When they learned of Kyril's mission to destroy the Rune Cannons, they joined his endeavor. During their journey, the two of them deepened their friendship once again.

Charlemagne is named after the real Charlemagne, king of the Franks, who united most of Western Europe and laid the foundation for modern France and Germany.