Sylvina (シルビナ, Shirubina) is a supporting character in Suikoden. Sylvina is a naive, but kind hearted, elf and the romantic interest of Kirkis. 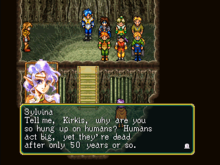 It's true but you shouldn't say it.

Sylvina was the granddaughter of the Chief of the Elves and was Kirkis' lover. Her appearance may have suggested someone young and naive but her love for Kirkis was deep and genuine.

Like most elves at the time, Sylvina held a low opinion of other races, including humans and dwarves. However, Sylvina still protested Kirkis' arrest for consorting with humans and later helped him and his companion's escape. 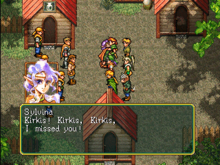 It was a tense 20 minutes without you.

Despite her misgivings, because she loved Kirkis, she decided to believe in Kirkis' ideals, even if they appeared incomprehensible to her. Still, Sylvina declined to accompany Kirkis on his quest to stop Kwanda Rosman's Burning Mirror, promising to wait for him instead.

After the complete destruction of Lukie Ende Towayo, Kirkis believed Sylvina to be dead. Fortunately, the swift-footed Stallion was able to rescue Sylvina from the blazing inferno, making those two part of the few survivors of the catastrophe.

After their emotional reunion, Kirkis appeared to reveal his intention to marry Sylvina and the couple joined the Toran Liberation Army. As the war continued, she began to overcome her prejudices, coming closer to Kirkis' point of view.

Following the Gate Rune War, Sylvina and Kirkis were married.