Caesar Silverberg (シーザー・シルバーバーグ, Shīzā Shirubābāgu) is a major character in Suikoden III. Caesar is a strategist in training who eventually helps the Fire Bringer's campaign in the War of the Champions.

Caesar Silverberg is a member of the famed Silverberg family of strategists and the younger brother of Albert. His laid-back personality and propensity for napping tends to obscure his strategic abilities, though his intelligence has never been doubted. Like his brother, Caesar was educated in Crystal Valley. However, unlike Albert, Caesar had little enthusiasm for the studying involved but still managed to impress due to his natural talent and occasional spurts of brilliance. 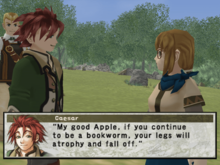 You don't need legs to be a great strategist, jerk.

It wasn't until Caesar met Apple while she was researching for her biography of Mathiu Silverberg that he took a greater interest in military strategy. Apple recounted stories of both Mathiu and Shu to him and Caesar would grow to empathize with their ideals. However, as his brother came to believe more strongly in the principles of their grandfather Leon, the two would grow distant as they grew older.

When Albert left home to help the Holy Kingdom of Harmonia in their aim for eventual global unification, Caesar similarly left with Apple with the goal of thwarting Albert's schemes. 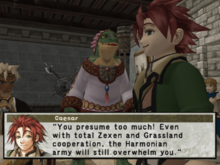 Yeah! We suck! Give it to us, Caesar!

Eventually discovering that Albert was aiding the Harmonian invasion of the Grassland, sparking the War of the Champions, Caesar would join the resisting Fire Bringer in response. His apparent lack of motivation was nowhere to be found as he confronted Albert, revealing his true feelings and passion for his beliefs.

Although he appears lazy, when action needed to be taken, Caesar was able to show his pride and self-confidence at being a Silverberg. It was Caesar's efforts that helped unite the fractured Zexen and Grassland at Brass Castle after their retreat from the Duck Village. His determination to prevent his brother's plans was similarly fierce, as he was willing to brave the dangerous Ceremonial Site to confront him.

As the driving strategic force behind the Fire Bringer, Caesar was instrumental in preventing the destruction of the Grassland at the hands of Luc. Although ultimately victorious, Caesar realized that he only succeeded due to Albert's covert aid and, recognizing the gulf of ability between the two, left on a journey to see the world and broaden his talents.