Barbarosa Rugner (バルバロッサ・ルーグナー, Barubarossa Rūgunā) is a main antagonist in Suikoden. The 17th, and final, Emperor of the Scarlet Moon Empire, Barbarosa Rugner's disinterest in the empire saw it fall in his reign.

Successor of the Sovereign Rune, Barbarosa became the 17th Emperor of the Scarlet Moon Empire after victory in the War of Succession.

Barbarosa was actually born the sixth son of Emperor Michelan and as such was considered to have held no chance of succeeding the throne. As such, little attention was paid to the young Barbarosa's tutelage, and he often played with commoner children and studied whatever he wished.

But as the years passed, two of Barbarosa's elder brothers fell ill and died to different diseases and Michelan worried his other sons had grown weak and corrupt from their pampering. And so, Michelan came to name Barbarosa as Crown Prince of the Scarlet Moon Empire. 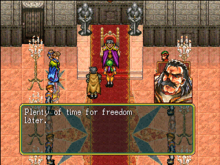 Oh you know it, bro!

In SY 446, while on a pilgrimage to pray for good harvest in Kunan, Emperor Michelan would pass from illness and taking advantage of the confusion, Barbarosa's uncle, Geil, removed Barbarosa from his position as Crown Prince and took the throne for himself, sparking the War of Succession.

Despite suffering early losses, including the death of his beloved wife, Claudia, Barbarosa's forces soon rallied from their base at Pannu Yakuta Castle and secured the throne following a final battle at Gregminster. Heralded as a patriotic hero, he become known as the Golden Emperor for his benevolent rule in his early reign. He would occasionally take lunch with Milich Oppenheimer, where the two would reminisce about Claudia.

However, in SY 449, he began to lose interest in his empire when he met the Court Magician, Windy, who physically resembled his late wife. Using Barbarosa's love to her advantage, Windy used her magic to manipulate the empire and soon the nation lost faith in its government and its Emperor. 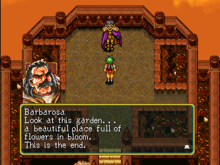 You can become the Republic's official gardener! Deal?

At the end of the war, as the Liberation Army marched into Gregminster Palace, Barbarosa made one last stand at defending his empire using the Rugner family treasure, the Sovereign Rune, for the first and only time, to transform into a three-headed Golden Hydra. He was defeated, however, and leapt from the Floating Garden of Gregminster along with Windy.

He has not been seen since, although his body was never found. Despite this, a memorial was built in his honor.