Grenseal (グレンシール, Gurenshīru) is a supporting character in Suikoden who makes a cameo in Suikoden II. During the Gate Rune War, Grenseal is a member of Teo McDohl's Armored Cavalry, along with his colleague Alen.

Grenseal served as both an officer in the Imperial Army as well as a subordinate of Teo McDohl. His skill with a sword and prowess with the Thunder Rune earned him the nickname "Lightning General." He had a cool personality, remaining perpetually calm and had a good-natured rivalry with his fellow subordinate, Alen. Grenseal's loyalty was to Teo, rather than to the Empire itself.

Grenseal, much like Alen, was first inspired to join the Imperial Army at the age of 12 when he was brought to Gregminster to see a victory parade for General Teo McDohl. His parents initially resisted, but his efforts eventually paid off and he was enrolled into the Imperial Academy.

Within six months, Grenseal was recognized as one of the more promising students at the academy. Although his swordsmanship was considered unremarkable, he was fairly proficient with the Lightning Rune and was well liked by his superiors for his studious nature, often seen studying or reading in his spare time.

He was considered cold and standoffish by other trainees though was rarely unpleasant. His attempts at advice often came off as criticism, and soon he was viewed by Alen as a potential rival for an appointment to the Central Army. 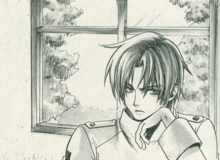 No, I don't "want to go to the party tonight". I'm reading about how, like, life is bleak, man, you wouldn't get it.

An argument between the two would provoke Grenseal into improving his swordsmanship as well as his mind, and in the 4th round of a training tournament, Alen would be soundly defeated by Grenseal's more methodical fighting style. Grenseal would handily lose to a senior in the next round, admitting he had only defeated Alen because he knew his temperament so well.

Alen would attempt to rematch Grenseal later that night, only for the two to come to the understanding that they had both been driving the other forward the entire time. More appreciative of each other, the two vowed to do all they could to graduate to the Central Army, a goal they eventually reached. 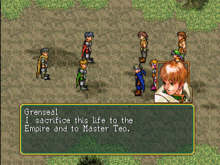 Grenseal would easily outlive both.

After witnessing the devastation the Fire Spear inflicted to the Armored Cavalry, Grenseal fought onwards with Teo and Alen, pledging that, if need be, he would sacrifice his life to the Scarlet Moon Empire and Teo McDohl. This proved unnecessary, however, as Teo McDohl challenged his son to a duel. Witnessing the duel between father and son, Grenseal rushed to Teo's aid following Teo's defeat.

When Teo told Grenseal that he had a request, Grenseal immediately asked to hear it. Teo claimed that he fought for Emperor Barbarosa out of sheer stubbornness and asked that Grenseal and Alen not to so purely to follow Teo's whims. Teo then revealed that he wished for Alen and Grenseal to join the Toran Liberation Army and aid his son, which, like Alen, Grenseal agreed to do.