Cave of the Past 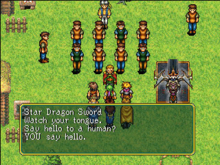 The Star Dragon Sword is an incarnation of the Night Rune that resided in the Cave of the Past at Qlon Temple. It had a face carved into its hilt which allowed it to talk and held a will and personality all of its own. It is one of the few weapons that can kill supposedly immortal demons, such as vampires. The sword was very prideful and prone to nagging and it was also large, making it difficult to handle by an ordinary warrior.

Following the Gate Rune War, Viktor had brought the sword to Jowston before abandoning it in the Cave of the Wind, finally tiring of its bickering.

Once Neclord reappeared, however, Viktor reluctantly returned to the Cave of the Wind with Kahn Marley and the leader of the New State Army to retrieve it. Enraged at having been abandoned, the Star Dragon Sword attacked the group but was subdued and agreed to be used again after Viktor groveled for its aid. Later, it helped in slaying Neclord once and for all together with Sierra Mikain. It also inspired the blacksmith Tessai to join the New State Army.

Following the Dunan Unification War, Viktor continued to travel with the sword for a time before eventually tiring of its sassiness once more and "gifting" the Star Dragon Sword to Edge, after Edge managed to use the sword to vanquish a vampire.

The Star Dragon Sword is fought as a boss enemy in Suikoden II. It has some ranged magic but is otherwise not a particularly challenging enemy for a party to defeat.