The Rune Cannon (紋章砲, Monshō-hō) was an artillery weapon used commonly on sea-faring vessels in the Island Nations region during the time frame of Suikoden IV and Suikoden Tactics. 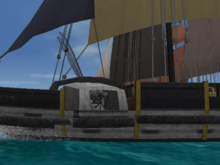 The eyes have it. And by it, I mean explosions.

This new weapon was developed by Warlock some 10-15 years prior to the Island Liberation War. Rune Cannons were crafted from creatures that came through from another world, including the Giant Tree. The seeds of this tree would become the basis for Rune Cannon shells, while the eyes of the Eye Fish were used as a lens on the cannon itself. Frequent close proximity to Rune Cannons could cause people to become ill. Damaged or destroyed Rune Cannons could also explode, mutilating anyone in its range with its magical properties.

Its sheer destructive power quickly set it apart from any past weapons used and quickly changed the face of battle itself. Over the next decade, Rune Cannons would become standard weaponry on nearly all vessels in the Island Nations, Kooluk and beyond. They would also be adapted for land warfare by the Kooluk military on the nation's border with the Scarlet Moon Empire.

After the Giant Tree was destroyed at the end of the Island Liberation War, Rune Cannon components suddenly became rare and resulted in many different forces investigating and hoarding materials. Iskas would find an Eye Fish and removing the eyes would fully awaken them, creating the Evil Eye, a Rune Cannon of sorts that could transform people into Fishmen. Attempting to use this power to stage a coup d'état in Kooluk, he would be thwarted by Kyril.

With the Evil Eye destroyed, Rune Cannons mostly fell into disuse without the parts needed to maintain them although the Island Nations Federation harbored a limited stock and would attempt to secure any lost or forgotten caches of Rune Cannon components they heard news of. They would also keep non-functioning or unarmed Rune Cannons on their vessels to act as a deterrent.

During the Sun Rune War, a cache of Rune shells would be found on the shipwrecked transport ship Kerzalik by the Prince of Falena and would be destroyed, against orders, by the Island Nations Federation officers accompanying him rather than letting them fall into the wrong hands.