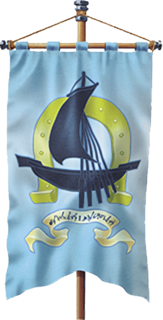 Flag of the Dukedom of Gaien. The text reads "Morality & Prospdrity (sic)" in southern script.

The Dukedom of Gaien (ガイエン公国, Gaien Kōkoku) is a nation that forms part of the plot and back story for Suikoden IV and is mentioned in Suikoden Tactics.

The Dukedom of Gaien was a huge island country located in the south-west Island Nations. A great power in the region, it was bordered to the east by the Kuknasi Sea and to the north by the Rassina Sea.

Gaien was officially a monarchy but around the time of the Island Liberation War, the power of regional governing lords had increased. Governance tended to be left to the discretion of these lords and Gaien functioned almost as a republic while the monarch reigned in name only.

Gaien's primary industry was the production of carpets and clothing as well as ship manufacturing and repair. Farming was rarer and the country tended to rely on food imports.

The country had a long history and especially notable was its many repeated conflicts with the north-eastern Kooluk Empire. Middleport was originally a Gaien territory and there was much bitterness from the nation over its past occupation by Kooluk.

A series of defeats to the Kooluk Empire would mark the beginning of a decline for Gaien's eastern forces. Around the time of the Island Liberation War, the number of regional lords who were loyal only to their own profit and self-preservation rather than to their nation was not inconsiderable.

The Gaien colony of Razril was once home to the Knights of Gaien. Due to the changing times within Gaien itself, when Razril was captured during the Island Liberation War, Gaien chose not to send any relief to try and liberate the occupied island, apparently out of a desire not to further aggravate tensions with Kooluk.

That colony would become independent following the Island Liberation War, becoming a member of the new Island Nations Federation.