He lives in Kyaro Town, a small town in the Highland Kingdom. Brought up together with Nanami under the tutelage of Genkaku, who ran a dojo there, the hero is caught up in the tides of destiny and finds himself immersed in battle. As time passes, he grows and matures, seeing a farewell to his home, a battle with his best friend Jowy, as well as the loss of loved ones. 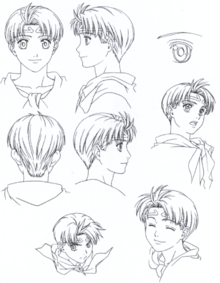 The hero is a young man with short brown hair and hazel eyes. He wears a red tunic with white piping, tied together by a white waistband. He accompanies this outfit with a yellow cloth around his shoulders and brown gloves. This cloth was worn by Genkaku in his youth and was passed down to the hero.

Under his tunic, the hero wears calve-length black spats and high brown boots. He wears a golden circlet around his forehead, received as a child when Genkaku bought it for him at the first fair he had ever seen. The hero wields twin wooden tonfa as his weapon of choice, tipped with metal at both ends.

The hero's build was regarded as slim. When meeting Gustav Pendragon, Gustav remarked that many youths his age had arms twice as big as his. As someone raised in Kyaro Town, the hero had a noticeable Highland accent.

The hero was noted for his strength, but also his lack of belligerence. He fought solely to protect others, as the Bright Shield Rune he inherited symbolizes. Living up to the expectations of those who relied on his strength was a major motivation for him to continue fighting even through the despair of the Dunan Unification War.

As a citizen of the Highland Kingdom and a member of its Unicorn Brigade, he had no little loyalty and feeling towards the land of his birth. However, the destruction of Toto Village truly cemented the need to fight against Highland's aggression in his mind. Still, he hoped to some day return to his home in peace.

The idea of "family" was central to the hero and his motivations also. As an orphan, the family he had found with Genkaku and Nanami, as well as Jowy, was extremely important to him. Later, during the Dunan Unification War, he would see his comrades as part of another family, spurring him to continue fighting for them. 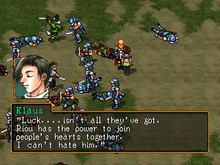 Even the enemy was smitten with his low-dialogue charisma.

Shu saw in him the hope of the people of Jowston, not merely as the son of Genkaku, but as his own person. Because of this, Shu would push the hero to become the leader of the New State Army despite his youth. It was said his true strength was his uncanny ability to touch the hearts and earn the trust of his comrades. His kind-heartedness inspired others to help him in turn.

Even were he to abandon his duties and flee with Nanami from Tinto Principality, it is likely that this too would be an attempt to fulfil her wish. In the end, his lack of hostility is what would allow both he and Jowy to survive their duel at Tenzan Pass.

Twenty quatloos on the newcomer.

The hero was a war orphan who was adopted and raised by Genkaku at his dojo in Kyaro Town. Nanami was also picked up by Genkaku in similar circumstances and in short order, a close brother-sister relationship was formed. When the two were old enough, Genkaku trained both of them in martial arts. The two continued to grow healthy and progress smoothly in their martial arts training.

The hero and Jowy Atreides first met one summer day when they were both young. Both boys had never been part of the normal children's circle, being shunned for different reasons. The two found a sense of belonging with one another and they soon became best friends. The two ended up studying martial arts together, along with Nanami.

Following Genkaku's death, he enlisted in the Unicorn Brigade alongside Jowy. While Jowy had enlisted for honor, the hero had mainly signed up to earn his keep. The two were equally matched, tying in the final of a tournament of Unicorn Brigade officers after a long bout. They excelled in the brigade and both believed that their futures lay in the Highland Army. 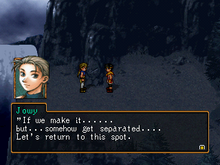 "Let's meet up at the massacre ground." Great pick, Jowy.

On the eve of their return home, the Unicorn Brigade came under a night attack at Tenzan Pass. Attempting to flee, the hero and Jowy discovered that the raid was not carried out by the City-State of Jowston, but by Luca Blight under the guise of an attack, a betrayal. The two were eventually corned on a cliff by Captain Rowd. With no other choice, they made a mark on a nearby rock and promise to meet again here if they ever get separated before jumping desperately into the rapids below.

He was discovered by Viktor and Flik and taken to their Mercenary Fortress. He would escape with Jowy's aid and return to Kyaro Town. There, he was reunited with his sister, Nanami. Realizing that Rowd had implicated both the hero and Jowy as spies, Nanami would come up with a plan for the three to run away together. However, they were each swiftly captured and condemned as spies of the City-State. After being rescued from execution by Viktor, the trio would be forced to flee the Mercenary Fortress when the Highland Army invaded Jowston. 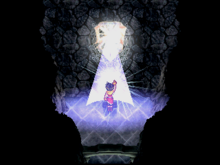 Passing through Toto Village, they entered an open shrine there. There, they found Leknaat, the guardian of Gate Rune. Encouraging them to enter further, both the hero and Jowy were shown the memories of their peaceful childhood and their failures in protecting those they cared for. Desiring the power to protect people, the hero would gain the Bright Shield Rune, changing his destiny forever.

Making his way to Muse City, the hero continued to fight in Viktor's mercenary army. A reconnaissance mission at the Muse-Highland Border ended disastrously with the capture of Jowy. Even Jowy's eventual escape turned sour when it was revealed that Jowy had chosen to align himself with Highland for his own reasons. After Muse City fell to Highland, the hero, Nanami, and Pilika were forced to flee once again, first to Coronet Town and then to South Window City.

Leader of the New State Army

Reuniting with Viktor and Flik in South Window City, the hero became regarded as a figure to look up to in his own right after playing a pivotal role in defeating Solon Jhee. Shu would then ask him to lead a New State Army against the invading Highland forces. Although Nanami protested the idea, the hero believed that he couldn't ignore the threat of Luca Blight's ambition, and after listening to the story of Genkaku, the man who raised him, decided to lead the force. Upon taking the mantle of leadership, Leknaat appeared once again to tell the hero that the 108 Stars would gather under him and lent him the Stone Tablet of Promise and the services of Luc to that effect. 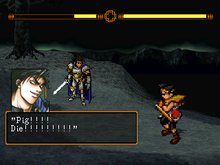 As the leader of the New State Army, the hero helped repel the Highland advance. However, the army was soundly defeated by the power of Luca Blight himself. Learning that Luca was planning a night attack, an ambush was prepared. The ambush was successful but, despite his wounds, Luca sprung his own attack on the hero, pushing the two into a fatal duel. The hero would emerge victorious, ending the battle but not the war.

With the death of Luca, Jowy had ascended to become King of Highland. While both had the same desire for peace, the hero and Jowy's differences in how to pursue this meant that he would quickly stand opposed to Jowy, with the support of his many allies.

Just before the New State Army siege on Greenhill City, Jowy would meet with the hero, asking him to stop fighting. However, the hero couldn't give up the friends who have helped him and the hope he held. With the same feelings spurring Jowy forward, this marked the moment when the two best friends realized that their battle was inevitable as befitting the bearers of the two halves of the Rune of Beginning. 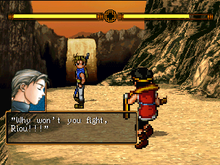 I'm just trying to get the best ending here, Jowy, calm down.

Despite his losses such as the loss of his friendship with Jowy and the apparent death of Nanami at Rockaxe Castle, he continued to grow as a leader and fought for his dream; a peaceful world for his friends to live in. Although it started as a small group, the New State Army would gain rapid momentum, becoming a mighty torrent backed by the charm and magnetism of its leader. He would lead the army to victory, sweeping away the Highland Kingdom and ending the Dunan Unification War.

However, Jowy was not present in L'Renouille Palace for the fall of Highland. Seeing the inevitable fall of the kingdom, he had returned to that fateful rock at Tenzan Pass, where their journey began. Heading there, the two would face off in one final duel, both their lives being chipped away by their runes. But when the hero's desire for peace overcame the power of the Rune of Beginning, a miracle occurred and the two were restored. 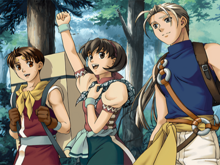 Being able to reunite with both Nanami and Jowy, marked a personal victory after fighting so hard for everyone else's hopes. Reunited, the trio would embark on a journey together freeing themselves from the war and strife that the hero fought so valiantly to end. Even if he should face further hardships in the future the support of his friends should allow him to keep moving forward.

You will never have a name.

He was added as a playable character called Suikoden 2 Hero Bomber (輝く盾の紋章の英雄ボンバー, Kagayaku Tate no Monshō no Eiyū Bonbā, Bright Shield Rune Hero Bomber) at the start of the game's third season on December 17, 2021.

From Planet Dunant, this version of the hero leads the New City-State Army against the Highland Kingdom and the ambitions of the nefarious Prince Luca.

His special skill is the Twintooth, which allows him to knock bombs and opponents away by spinning his tonfa. 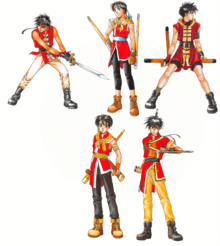 Originally the hero was designed to wield a staff, much like the hero of the first game. However, this was changed during development so as not to create a tradition that all main characters in the series would use a staff. The decision to use tonfa specifically was made after much research into Chinese martial arts books.

Early in development, the hero's circlet was also envisioned as a hachimaki, a Japanese headband, but was eventually changed after Ishikawa Fumi drew him with a Sun Wukong-type headband after a joking suggestion from a colleague. His red outfit was a deliberate attempt to remind the player of the main character from Suikoden.

The inclusion of Nanami as his elder sister was intended to ground the hero as more of a "commoner" in contrast to the "young master" of the first game. His reserved personality was also designed to be overshone by his childhood friends.

The hero of Suikoden II has no in-game name but is occasionally referred to by different names in other publications and releases. In the 2000 novelization, as well as the 2008 Radio Genso Suikoden: Assemble! 108 Stars! radio drama, he is called Riou (リオウ, Riou), the most popular name used for him by fans. The 2009 manga, Genso Suikoden The Being Torn Spirit, gives him a different name, Tao (タオ, Tao).

In guide books, he is usually referred to as HeroII (主人公II) or some variant thereof, such as II主人公 to distinguish himself as the protagonist of the second Suikoden title. All Genso Suikoden Card Stories cards featuring him also refer to him simply as 主人公 as the hero of the first game is referred to as McDohl.