Suikoden (幻想水滸伝, Gensōsuikoden) is a series of role-playing games published by Konami.

Dating back to the Sony PlayStation, the game series is loosely based on the classical Chinese novel Shui Hu Zhuan, whose title is rendered as Suikoden (水滸伝) in Japanese. Each individual game in the series centers on relative themes of politics, corruption, revolution, mystical crests and the 108 Stars, the 108 protagonists who are loosely interpreted from the Shui Hu Zhuan. 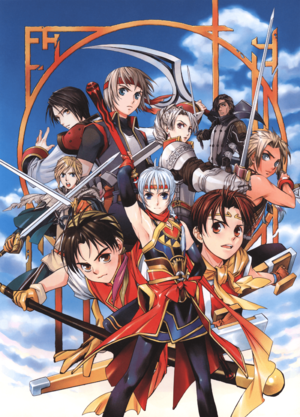 A selection of protagonists from the first 10 games in the series.

The Suikoden series is a video game franchise published by Konami. It is a Japanese role-playing game series with varying gameplay, settings and stories between each installment, with a lineage of shared continuity running through many of the games.

Though the core series is a role-playing game franchise, it has branched into other genres, such as tactical role-playing games, visual novels, and card games. The series has been distributed on many platforms, beginning with the Sony PlayStation, and including consoles, computers, and mobile phones. The Suikoden series has also branched into other forms of media, particularly novels, manga, and audio dramas.

In almost every game of the series, characters can equip armor and accessories. Several games of the series feature individual inventories, where items must be equipped to a character in order for them to be able to use said item in battle. Most games also feature a standard inventory you can equip armor, accessories, and other items from.

Unlike many Japanese role-playing games, the first six titles do not feature purchasable weapons. Instead, characters must have their weapons upgraded through a blacksmith, increasing their statistics over time. Later games deviate from this; Suikoden Tierkreis and Genso Suikoden Tsumugareshi Hyakunen no Toki both focus on the purchasing and equipping of weapons just the same as armor or other accessories.

Duels occur at key plot moments in most games of the series. Duels are a one-on-one fight against an opponent and does not use the party battle system.

Instead, you are given a selection of commands and a health bar. Like rock-paper-scissors, your commands have an advantage and disadvantage. By predicting the next move of your opponent through their expressions and dialogue, the player will enter their command. The two will then fight, turn-by-turn, until one is defeated.

The Suikoden series usually puts the player in control of multiple characters in a party of between 4 and 6 characters depending on the game, though there are exceptions. The player will build the party's strength by gradually acquiring new abilities and equipment to handle more powerful opponents.

As a Japanese role-playing game, these battles involve the use of in-game menus to select actions.

In the seven games of the "main series", the player is able to recruit up to (and sometimes exceeding) 108 characters; each with their own style, personality, and role. Not all of these characters are potential battle party members. Some act as merchants, some trigger mini games, some offer assist abilities (such as post-battle healing), and some add to your abilities in other gameplay instances such as war battles.

Suikoden Tactics does not feature 108 characters but does have a large number of characters to recruit. In games with 108 characters, there is generally a secret, or "best", ending gained by collecting all 108 Stars.

War battles take place when at key plot moments you lead a large force against the opposing side, much greater in scope than a battle party could handle. These represent pitched war battles, consisting of hundreds or thousands of soldiers.

Each game in the series that employs war battles uses its own particular formula, be it grid-based, strategic, or even real-time combat. The abilities of the characters you have recruited, even those who do not normally participate in party battles, are often very important is these instances.

The first ten of the thirteen individual titles released in the Suikoden series take place in the same, unnamed, world. This world is a setting with two main forces at play.

One is runes, which are magical crests that characters may have equipped to give them magical powers or enhanced abilities. Greater than these even are the 27 True Runes, which are, according to series legend, said to have a key part in the creation of the world.

The other main influencing force is that of the 108 Stars. A much more nebulous and esoteric influence than even runes, the 108 Stars are frequently described as guardians, guides, or signposts for individual characters. Each "main" title in the Suikoden series involves a convergence of the 108 Stars.

Games in the Suikoden series tend to intertwine these two forces, as well as the temporal politics of the games events in order to examine notions of destiny, order, chaos, and the meaning of will.

Games since 2008 have taken place in different worlds of what is called the Infinity, a multiverse concept previously alluded to in other titles. These titles do not involve runes but do include the 108 Stars and have their own, individual lore aspects.

The Suikoden series first began with the release of Suikoden for the Sony PlayStation on December 15, 1995. It was developed by Konami Computer Entertainment Tokyo. Release early in the PlayStation's life cycle, it sold well due in part of a lack of competing RPGs on the new system.

2002 saw the release of Suikoden III, the first 3D entry of the series. Although it sold and reviewed well, series producer Murayama Yoshitaka would leave the team at the end of development. Kawano Junko would replace him as lead for 2004's Suikoden IV as well as its 2005 spin-off, Suikoden Tactics.

Suikoden V was released in 2006 but despite positive reviews, failed to match previous sales numbers hit by Suikoden III and IV.

The series' first portable title came in 2005, with the release of Genso Suikoden I&II, a compilation of the first two games, being released for the PSP.

In 2008, Suikoden Tierkreis was released for the Nintendo DS, abandoning the continuity built up by the previous games in favour of a new, independent setting. Prior to its release, Genso Suikoden Tierkreis Hoshikuzu no Shiro, a mobile phone visual novel intended as a prequel to the new title, was also released. In 2011, Pachislot Genso Suikoden was released as a pachislot machine for Japanese gaming parlors, and later received a mobile port.

2012 saw the release of Genso Suikoden Tsumugareshi Hyakunen no Toki, set in a third separate continuity, on the Sony PSP, which produced average reviews and disappointing sales.

On September 16, 2022, Konami announced development of Suikoden I&II HD Remaster, a HD compilation of the first two games in the series, marking the first new Suikoden game development in over a decade.