Suikoden III: The Successor of Fate 4 (幻想水滸伝III -運命の継承者- 4, Gensōsuikoden III Unmei no Keishō-sha 4) is the fourth volume of the licensed manga adaptation of Suikoden III published by Media Factory between 2002 and 2006.

This volume would be published by Tokyopop in the United States, with an extra two pages summarizing the story thus far and an additional three labeling the key characters in the plot.

The fourth volume covers finishes Hugo, Chris's, and Geddoe's Chapter 3 scenarios and touches on the very beginning of the game's Chapter 4. 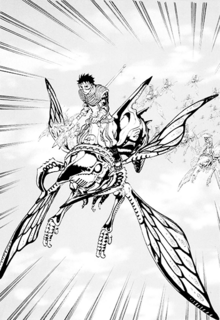 Not much scarier than a giant flying insect cavalry.

Chris Lightfellow and Nash Clovis travel to Kuput Forest, hoping to seek out the Alma Kinan for information on the True Water Rune, the rune borne by Chris' father, Wyatt. The two are quickly surprised by Yuiri and Yumi and brought to the Alma Kinan Village.

In the village, they meet Yun, who explains her visions of disaster to come, which are dismissed by Chris. The revelation that the Holy Kingdom of Harmonia is invading also enrages her. Nash admits he concealed this information in order to draw Chris away from the Zexen Knights, reducing their effectiveness, but wryly notes that Salome Harras is also taking advantage of this situation.

Later that night, Yun says her good-byes to Yumi and Yuiri as she prepares for the soul-sending ritual. Chris at first tries to dissuade Yun, but is moved by the youth's implacable faith. Talking about her past meetings with Wyatt, Yun explains how much he truly cared for Chris, inspiring Chris to try and save his life, in defiance of Yun's vision.

The soul-sending ritual goes ahead and Yun passes away, unsealing the True Water Rune. The Alma Kinan now prepare to march for Chisha Village to fight the Harmonian army, with Chris determined to accompany them. Meanwhile, the Destroyers look on from a distance, noting the seal was broken without their interference and that their plans continue apace.

Meanwhile, Hugo, Mua, and Hallec arrived at Chisha Village and find Apple and Caesar Silverberg deep in discussion with Chisha elder Sana. Aware of the upcoming battle, Caesar advises a full retreat but the villagers are reluctant to leave their homes. Sana also dismisses the rumors of the Flame Champion's return, dampening spirits further.

In the Harmonian camp, Sasarai and Albert Silverberg plan their strategy, with Sasarai noting that Albert had been seen speaking with the Masked Bishop. Sasarai's adjutant Dios prepares supplies for the mantor trainers of Le Buque, led by Franz.

Back in Chisha, Fubar and Sgt. Joe arrive and are relived to find Hugo alive and well. Sgt. Joe brings news that the Karaya, Lizard, and Duck Clans will be participating in the battle also. Caesar and Hugo scout ahead and estimate the Harmonian advance guard to be 2,000 men or so and Caesar begins his plans to hold off this force for half a day until the Grassland reinforcements can arrive. 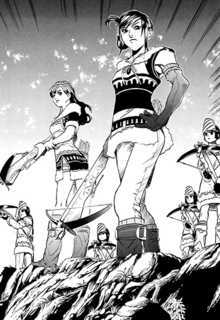 The Le Buque forces are sent out first as cannon-fodder but quickly panic and pull back after a symbol in the shape of the True Fire Rune is set ablaze in the fields, harkening to the return of the Flame Champion and notions of Grassland independence. The remaining Harmonian force is momentarily slowed by Caesar's traps but quickly threaten to overwhelm the besieged villagers when the arrows of the Alma Kinan buy some respite.

The battle now becomes a fierce, pitched conflict, with Hugo, in particular, feeling the pressures of taking life in battle for the first time, reminding him of his encounters with Chris, who is also fighting alongside the Alma Kinan on the other side of the battlefield. Finally, the Grassland forces arrive and the Harmonian advance is forced to withdraw. Afterwards, Sasarai receives a report from Nash on his activities.

Chris sneaks away after the battle, although not unnoticed by Sgt. Joe. Yuiri holds him to secrecy, while Sgt. Joe wonders what role the Zexen Federation will play in this conflict.

In Chisha Village, Sana proposes that Hugo inherit the actual True Fire Rune. Hugo agrees and is taken to the Flame Champion's Hideaway. However, Sana and Hugo are interrupted by Geddoe, who is adamant that Hugo not suffer under the rune's curse as he, Wyatt, and the Flame Champion once did.

This conversation is interrupted in turn by Yuber and Sarah. Now that Sana has lowered the barrier to allow Hugo the True Fire Rune, it is the perfect time for them to strike and take the rune themselves.