Suikoden III: The Successor of Fate 3 (幻想水滸伝III -運命の継承者- 3, Gensōsuikoden III Unmei no Keishō-sha 3) is the third volume of the licensed manga adaptation of Suikoden III published by Media Factory between 2002 and 2006.

This volume would be published by Tokyopop in the United States, with an extra two pages summarizing the story thus far. The color pages from the original Japanese manga would be restored for the Tokyopop edition of this volume after being printed in black-and-white in the previous volume.

The third volume covers most of Hugo's Chapter 3 scenario and finishes Geddoe's Chapter 1 as well as his Chapter 2 scenario. Chris Lightfellow's Chapter 2 ending is also briefly referenced, with her departing from Brass Castle.

Aila and Geddoe's group spot an advancing Harmonian force, led by Bishop Sasarai, but pass unnoticed, proceeding to Caleria. There, the group attempt to relax and gather information only for the group to be confronted by their rivals, Duke's 14th unit of the Southern Frontier Defense Force.

Duke taunts Geddoe with the information that the Harmonian force is apparently searching for the Fire Bringer and their leader, the Flame Champion, at the behest of a Masked Bishop. Geddoe hurriedly leaves, reads a note in his room, and suddenly announces the group needs to head to Le Buque, home of the mantor trainers. 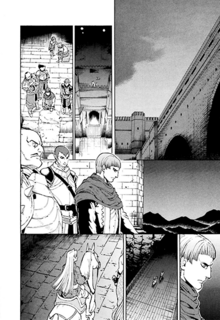 If you love your Zexen Knight, let her go.

Meanwhile, at Brass Castle, Chris Lightfellow and Salome Harras discuss Chris' plan to leave and track down the whereabouts of her father, Wyatt, supposedly a bearer of one of the 27 True Runes. Chris entrusts Salome with command over the Zexen Knights and, worried about the Zexen Council being potentially infiltrated with Harmonian spies, begins a plan of his own.

At Budehuc Castle, Hugo shares his story with Thomas. In turn, Thomas reveals how the loss of his mother in a Grassland attack brought him to Budehuc and how it has inspired him to create a peace where people from all places can thrive. Thomas' eavesdropping comrades burst in to proclaim their devotion to his cause.

Later, while ruminating outdoors on all that's happened, Hugo is approached by two strangers, Apple and Caesar Silverberg, whom he brings to Budehuc Castle. There, they conduct research using the library. From them, Hugo learns about the Fire Bringer and the Flame Champion. Resolving to seek the power of the True Fire Rune, Hugo intends to leave only to find the castle surrounded by Zexen Knights with a warrant for his arrest.

Caesar concocts a plot to smuggle Hugo out in the armor of a captured Zexen soldier and so Hugo escapes and the castle is cleared of suspicion of harboring a fugitive. While sneaking away with the other soldiers, Hugo learns of the Harmonian advance into Grassland and decides to travel to Chisha Village, their next target, to warn them. 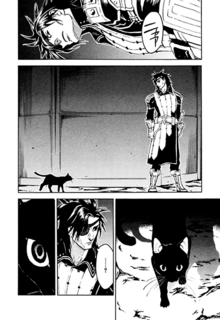 Clash of the titans.

Geddoe's group arrives at Le Buque only to find the villagers at odds against Franz, a mantor trainer arguing that cooperation with Harmonia will secure them second-class citizenship, a step up from their current near serfdom. Sarah, assistant to the Masked Bishop, breaks up the dispute.

That night, Aila and Iku, Franz's girlfriend, share stories of the Grassland and Le Buque's struggle with their identity, while Geddoe informs his team that the Altar of the Mantor Trainers was once called the Altar of the Flame Champion and that may form part of the Masked Bishop's motive for coming to Le Buque. Sarah attempts to ward off Geddoe with a cryptic warning in the guise of a cat, but he is unimpeded.

At the altar, Geddoe's team is attacked by Duke's unit, under the command of the Masked Bishop. Geddoe quickly dispatches Duke, but while the others fight, Aila rushes on ahead. There, she encounters the Destroyers and is nearly killed by Yuber before Geddoe is able to deal substantial damage with a rune attack.

The Destroyers withdraw and, in the aftermath, rumors circulate that Geddoe is the bearer of the True Lightning Rune. Jimba and Geddoe share a brief conversation, interrupted by Geddoe's team who reaffirm their loyalty no matter their boss' past. As they leave, Jimba solemnly notes that Geddoe has made some good friends, unlike himself who remains alone in his duty.

At Duck Village, Hugo is eager to continue his journey only to be interrupted by a ruckus caused by Mua and Hallec. The confusion is quickly cleared up and as the three have the same mission; to find the Flame Champion, they continue to Chisha. The Harmonian army continue their advance, the Grassland forces prepare to march and make their stand there also, Chris and Nash continue to journey, and Salome holds Zexen back as things begin to come to a head.