Suikoden III: The Successor of Fate 5 (幻想水滸伝III -運命の継承者- 5, Gensōsuikoden III Unmei no Keishō-sha 5) is the fifth volume of the licensed manga adaptation of Suikoden III published by Media Factory between 2002 and 2006.

This volume would be published by Tokyopop in the United States, with an extra two pages summarizing the story thus far.

The fifth volume covers the early parts of the game's Chapter 4 with some significant differences.

Geddoe attempts to fight off Yuber and Sarah as Hugo deliberates on inheriting the True Fire Rune. Geddoe fights fiercely but, unable to use his True Lightning Rune in such a confined space, is eventually overwhelmed, only for Hugo to strike back using the True Fire Rune. Having failed in their mission, Yuber and Sarah retreat. Hugo collapses, overwhelmed by the rune's power and the visions it imparts.

Hugo awakes to Geddoe's wounds being treated by his 12th Unit colleagues. Geddoe then shares the story of his True Lightning Rune and his friendship with the Flame Champion. He almost imparts a dire warning to Hugo; as the True Fire Rune appears to have a will of its own, it will try and force its bearer to use it. If left to run amok, it would cause untold destruction. Geddoe tells Hugo that he must now accept the title of Flame Champion and then he will act as Hugo's rod and shield if need be. 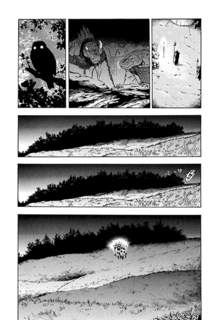 That owl is a spy!

The Lizard Clan begins their night raid but it is immediately apparent that the Harmonians have anticipated the attack. The Lizard Clan take great casualties under arrow fire before quickly retreating. Sasarai commends Albert Silverberg on his excellent strategy. Knowing it likely that the Harmonians will now attack at dawn, and with the failed raid having plummeted morale, Lucia announces that the Flame Champion will be returning eminently to Chisha Village, and they need merely hold out until then.

The next day, Lucia demands a face-to-face meeting with Sasarai before battle. Sasarai offers to withdraw his forces and even sign a new treaty if the Flame Champion is handed over. Of course, Lucia refuses. The Grasslanders begin their attack but Sasarai's True Earth Rune is enough to deflect their efforts. Sasarai then withdraws, satisfied that the Flame Champion is not present. The Harmonian Army swiftly overwhelms the outnumbered Grassland forces. A full retreat is ordered; the Grassland forces will withdraw to Duck Clan lands.

In Vinay del Zexay, the Zexen Council endlessly deliberate which side to take between Harmonia and the Grassland. Salome Harras acts passively but is in reality shoring up evidence of Harmonian collusion within the council. Speaking with his colleagues in the Zexen Knights, he also stresses the necessity of allowing the Grasslanders to know defeat before possibly allying with them; they will not let go of their old grudges otherwise.

The Council, now wary of Salome, attempt to dismiss him by ordering him to Budehuc Castle. Instead, Salome begins his coup. Presenting (faked, as the originals had all been burned) proof of collusion within the Zexen Council, the Zexen Knights assert authority over the council while they investigate individual council members. Now free to act, the Zexen Knights prepare for battle.