Suikoden III: The Successor of Fate 2 (幻想水滸伝III -運命の継承者- 2 , Gensōsuikoden III Unmei no Keishō-sha 2) is the second volume of the licensed manga adaptation of Suikoden III published by Media Factory between 2002 and 2006.

This volume would be published by Tokyopop in the United States, with an extra page summarizing the story thus far. The color pages from the original Japanese manga would be printed in black and white for the Tokyopop edition of this volume.

Chris Lightfellow, having collapsed following the battle, awakens only to learn that Salome has been attempting to block the Zexen Council's aggressive intentions.

Meanwhile, at the Great Hollow, the regrouping Karayans learn about how Chris apparently led the Zexen Knights in the attack that killed Chief Zepon, a seeming impossibility given her presence at the truce agreement. Hugo and Sgt. Joe soon arrive and relay Lulu's death to his mother, Luce, and all mourn the loss.

Geddoe's group (and Aila) fend off a monster attack while ruminating on the razing of the Karaya Village. Geddoe eventually decides to return to Caleria, the Southern Frontier Defense Force base, for more information.

Hugo sneaks off from the Great Hollow alone in the hopes of revenge. Meanwhile, Chris and Percival travel to Iksay Village for a brief respite. There, Chris meets the mysterious Nash Clovis who warns of an impending attack on the village by the Karaya and Lizard Clans. 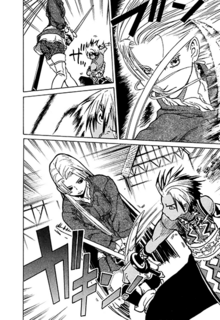 Don't worry, kid. I'm sure YOU can solo this encounter.

In the ensuing attack, Chris and Lucia duel but the result is inconclusive as Nash interrupts, dragging himself and Chris off a cliff and into the river below, escaping. Having surfaced, Nash reveals he has been searching for Chris' father, Wyatt Lightfellow.

At Budehuc Castle, Hugo has been working chores for Thomas in order to earn his keep when he notices Chris has also arrived. The Zexen Knights soon follow and Salome and Nash converse, agreeing that Chris should indeed search for Wyatt, as they prepare for a much larger foe than either Zexen or the Grassland could handle.

Their agreement is interrupted as Hugo attacks Chris in a rage, seeking vengeance. Chris handily defeats Hugo and spares him, only for the youth to quickly attack again. Thomas manages to step between the two at great personal risk and the knights take their leave, as Hugo sinks to the ground in despair.

At the end of the volume, Jimba's identity as Wyatt Lightfellow is revealed in a conversation with Sana about breaking a seal. At the same time, the Ancient Highway sees four mysterious figures attempt to break a seal of their own and fail before leaving, a Masked Man remarking that they have an appointment to keep.