Axe of the Oath (誓いの斧, Chikai no Ono) is a short story written by Hori Shinjiro and illustrated by Okashila., published in Genso Suikoden Short Story Collection 1 in 2000.

The story tells of how Gremio got his trademark scars and the origin of the name of his final weapon, "Axe of the Oath".

Barbarosa Rugner is the newly crowned Emperor of the Scarlet Moon Empire, but sedition is brewing. While away on pilgrimage in Kunan, the minions of Geil Rugner, including Assam, arrange to have Barbarosa's supporters sent on assignment, away from the capital.

Three months into his tenure at the McDohl household, Gremio reminisces on his childhood and how he came into Teo McDohl's service. With Teo away, the forces of Geil Rugner seized Gregminster in a coup d'etat and Teo's son was kidnapped by Imperial Army soldiers in order to prevent Teo McDohl from attacking. Gremio attempts to prevent the abduction but was easily felled and tied up by Assam's men. 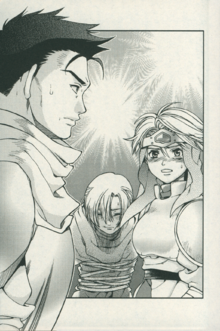 Look, I don't care what you two get up to on your own time, but you're on the clock here.

Gremio is kept alive to deliver Assam's ultimatum; Either Teo's famed Armored Cavalry would meet Geil's force in a decisive battle at the Fortress of Kwaba without their famed armor, or the young McDohl would be killed. His face was scarred as a mark of this ultimatum.

After being brought to Teo and relaying the ultimatum, much to Cleo's ire, Gremio sneaks back to Gregminster in order to rescue his young charge. Caught, he is almost killed only to be rescued by a youth named Eiji. Eiji, who lost his family to the looting by Geil's forces, helps Gremio escape to Sarady, where the two uncover McDohl's whereabouts at an inn requisitioned by Geil's allies from Ronettes. Together, Gremio, Eiji, and Ronettes rescue the young child from the inn, felling the bandit kidnappers. Gremio receives his second scar in the fight.

As the battle approaches, Teo rejects Assam's demands out of hand, unwilling to compromise his loyalty and beliefs for the ransoming of his son. Still, the incident greatly affects the morale of the unit and his good friend, Ain Gide, volunteers to have his cavalry take the lead in the ensuing battle, only to be turned down by Teo.

Galloping to Kwaba on horseback, Eiji is able to tell Teo of the rescue right before their battle against Geil Rugner's forces, led by Bergen and Schmidt. Geil's forces are routed, Gregminster is soon retaken and the War of Succession ends. After the rescue, Gremio engraves the words "I will always protect young master" onto his axe, giving it the name "Axe of the Oath."