This manga series would also be the first Suikoden series publication to be localized into English outside of Japan. It would be published by Tokyopop in the United States, with extra pages of text explaining the setting and story of the first two Suikoden games.

The first volume roughly covers the events of each of the three main characters in their Chapter 1 scenarios in the Suikoden III game, culminating with the razing of the Karaya Village. 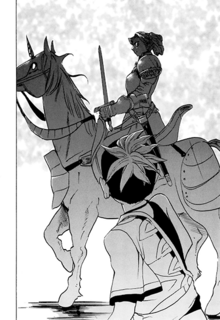 Don't worry, kid. I'm sure you can solo this encounter.

The manga begins with two prologues. The first shows how the young Hugo first bonded with the baby Fubar, with Fubar eventually earning the respect of the Karaya Clan by saving the young Karayan from a wolf attack. The second depicts Chris Lightfellow's struggles gaining the respect of her comrades due to their sexism, the support and guidance she receives from Captain Galahad and eventually her stepping into the role as commander of the Zexen Knights following Galahad's death in battle.

In the present, Hugo and Lulu are chosen to represent the Karaya Clan as they attempt to negotiate a truce with the Zexen Federation. In Vinay del Zexay, a suspicious stranger enquires as to the whereabouts of Chris' father, Wyatt, as she deals with the pressures of the Zexen Council. At the Karaya Village, Geddoe and the 12th unit of the Southern Frontier Defense Force arrive only to be accosted by Aila.

In Vinay del Zexay, Hugo's group deliver their message only to rebuffed and that evening narrowly evade capture by the Zexen Knights. Meanwhile, a truce meeting between Zexen and the Six Clans quickly breaks down into warfare when it is revealed that Zepon, chief of the Lizard Clan, has been murdered by the knights.

Surrounded and already sustaining heavy losses, Chris' knights attempt to break through by razing the Karaya village. Geddoe's group, and Aila, are too far from the village to intervene. Hugo and Lulu return to the village just in time to witness the apparent massacre of the Karayans and, enraged, Lulu attacks Chris. Chris reacts instinctively, cutting the youth down, killing him instantly.

The next day, in the smoldering ruins of the village, Hugo breaks down in tears as the survivors from the battle begin to bury the dead.