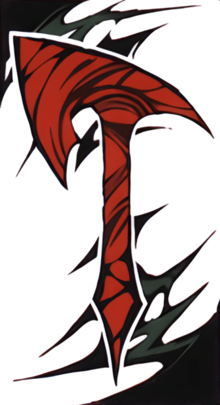 The Vermilion Axe (朱キ斧, Shuki Ono) are an organization in Genso Suikoden Tsumugareshi Hyakunen no Toki. They are a rebel army dogmatically opposed to the Holy Empire of Ionia.

The Vermilion Axe began as a secret organization led by Aaron Barcai and Rochelle Kollek to organize and foster the already existent discontent and resentment many felt towards the Holy Empire of Ionia, especially in the wake of historical atrocities at Schradt and Martylion.

Having researched and gained the technology to spawn Teras Pharma, Aaron would reveal his intentions and the existence of the Vermilion Axe as a whole in a first strike against the Ionian army. He would unleash the Teras Pharma on Schradt, wiping out the Ionian Army's 4th Branch before attempting to cross the Great Bridge and strike at the Holy City of Thaksis, only to be thwarted by General Damdin's destruction of the bridge.

Following this, the Vermilion Axe would proceed west through the provinces, temporarily occupying or working with towns such as Fairpeak and Orosk Village along the way.

They would be noted for their dogmatic hatred of anything Ionian. Any form of cooperation, tolerance, or meeting with Ionian soldiers or representatives would be reprised with violence and deadly force, under their creed that any "fruit of the Blighted Tree", as they called Ionia, was poisoned.

They also held no regard for the death of civilians or collateral damage. Their maxim was embodied by the phrase "We vow to fell Ionia, that Blighted Tree, even if our hands must be drenched in the blood of our people!" Although they often claimed to be merely highly pragmatic or tried to divert scrutiny by pointing out Ionian atrocities, most members were motivated by grief and revenge, making them all the more brutal.

Their access to lost technology, such as ships, often allowed to outmaneuver and trap Ionian forces, giving them an enormous advantage in battle. Their biggest victory came at the ruins of Martylion, where 3rd Branch General Dilom Lances attempted to use the town's historical tragedy to anger and bait the Vermilion Axe's forces, only to find himself surrounded and completely wiped out.

From there, the Vermilion Axe army would march south, then east only to be repelled at the Great Wall of Achlites by 2nd Branch General Quinelia Liuis and the hero's forces. Around this time, it also became apparent that forces within the Vermilion Axe were cooperating with Ionia in some fashion, though it was not known which group had infiltrated the other.

Part of the reason for the Vermilion Axe's defeat at Achlites was that Aaron Barcai's force used the battle as a distraction so as to travel to the House of Wisdom. There, he would learn that the technology to spawn Teras Pharma was of Ionian origin and that Rochelle Kollek was an Ionian double-agent. Her mission was to help found the Vermilion Axe in order to provide an underlying threat for the Holy Empire to focus people's fears on.

Aaron would attempt to release the Teras Pharma stored at House of Wisdom, to force the world to confront the truth, only to be thwarted. Rochelle managed to prevent the devastation this would cause by destroying the facility and everything inside, at the cost of her own life.

When Lugat Lugam used the Era Tree to manipulate the past, the Teras Pharma facility instead existed at the Tower of Zoe. The bodies of both Aaron and Rochelle would be found there, having killed each other in a struggle once the same truth was revealed.

Following the loss of its leadership, the Vermilion Axe would quickly fall apart and disperse.

Members of the Vermilion Axe