This is a game guide and reference book that covers Genso Suikoden Tsumugareshi Hyakunen no Toki, giving information on all gameplay aspects of the title while also showcasing some character art and lore details. 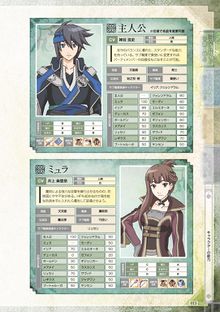 The book is split into four sections.

The System Guide is both a guide to the game's systems, such as upgrading and skill inheritance and the character gameplay guide, where stats, useable equipment types and other gameplay-relevant information regarding party members is kept.

The second part, the Scenario Guide forms the bulk of the book's content, giving 107 pages to a comprehensive walkthrough of the game, showcasing location maps, item locations, how to meet and recruit each of the 108 Stars, and what enemies exist in each area.

Part three is Data, the section of the book where items, spells, skills, and comprehensive enemy lists are kept.

The remaining 72 pages of this Complete Guide is given to Extras. This sizeable section shows character artwork and endings, illustrations by Ohtsuki Beruno for Dengeki PlayStation, a brief timeline and glossary for the setting of the game, and dining hall conversations between members of your party.