Gensopedia is an online encyclopedia dedicated to covering the Suikoden series. It originally began development in August 2007 before being launched on January 1, 2008.

It held over 2,000 pages and had accumulated over 6.6 million total views before being deleted, along with the entire Due Fiumi domain in September 2009. On May 8, 2011, it was revived from scratch as the encyclopedia subdomain of the newly-restored Their Star domain before getting its own domain, gensopedia.com, on March 9, 2015.

On April 4, 2020, the site moved to dedicated cloud hosting at gensopedia.org.

The name is simply a portmanteau of "Genso", from the Japanese names of the series, Genso Suikoden, and "Encyclopedia". It was chosen in order to avoid the use of the "Suiko-" prefix which was felt to have been overly common as well as being a potential source of confusion with sites such as Suikosource and Suikox.

In 2010, between renditions of Gensopedia, an alpha Suikoden encyclopedia project called the "Encyclopedia Suikoden" was run on the Their Star domain with the intention of evolving into a new Gensopedia. This name existed as a place holder only. 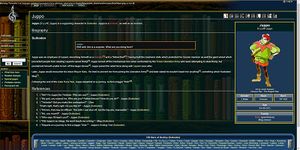 The Encyclopedia Suikoden was a 2010 private alpha project to develop a basic framework for a future Gensopedia.

The original Gensopedia was a closed encyclopedia administered by some two dozen volunteers from the Due Fiumi forums and the wider Suikoden fandom. The revived Gensopedia, on the other hand, remained an entirely closed service, editable only by its administrator until January 27, 2014, when it was opened for new user accounts and editing.

In late 2008, updates to Gensopedia began to slow down as interest in the Suikoden series began to cool with the lukewarm fandom reaction to the development of Suikoden Tierkreis. This would lead to the Gensopedia existing in limbo for several months until the administrator's frustration with plagiarism and lack of free time to maintain the domain led to the Gensopedia being pulled with the rest of the Due Fiumi domain in September of 2009.

2010 saw the forerunner of a new Gensopedia created as a private project of its administrator before enough articles were created to take it public in May of 2011. Since then, it has slowly grown in size and visitors. 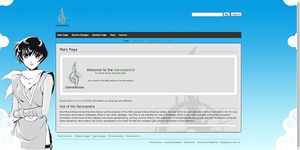 By late 2012, the new Gensopedia had over 400 articles focusing on the first two games of the series.

The original Gensopedia was criticized for a frequent lack of sourcing, especially for its more obscure translated information. This reflected the growing openness of information spread in the Suikoden community and the internet as a whole in the mid to late 2000s. Its closed doors and limited editors also led to criticism and accusations of elitism while its quick proliferation of articles led to a number of minor errors, misinterpretations and fandom assumptions being spread.

The modern Gensopedia aims to rectify these problems, but this had led, combined with the smaller modern Suikoden fanbase and a lack of exposure for Gensopedia itself, to a much slower rate of article creation and, in some cases, less detailed entries. The amount of control and editing done by its administrator has also been seen as a reason behind a lack of user contribution. It is hoped that these problems can be overcome in time.